Enjoy a steaming cup of hot tea or coffee with the Lomonosov Porcelain Bone China. Made from white bone china, this whimsical tea cup and saucer was made at the imperial Russian porcelain factory in St. Petersburg. It will be a perfect gift for avid tea and coffee drinkers. It's also a perfect addition to any porcelain drinkware collection.

Aram Khachaturian began his work on the ballet "Spartacus" in the tragic year 1941, but it had to be postponed for many years - the premiere took place only in 1956 in Leningrad.
One of the most famous productions was carried out by Yuri Grigorovich:in 1968 the performance was presented at the Bolshoi Theater, the star cast included Vladimir Vasiliev, Ekaterina Maksimova, Nina Timofeeva and Maris Liepa. The stage costumes of this legendary production are captured on porcelain. 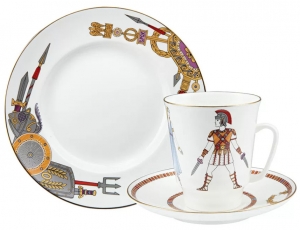