The Cat and the Fox

Once upon a time there was an old peasant. He had a cat who was always getting up to mischief. The old peasant got tired of him. He thought it over, then picked up the cat, put him in a sack, tied it up and took it to the forest. And there he left the cat to fend for himself. The cat wandered about the forest until he came to a woodman's cottage; he climbed into the loft and made himself at home. When he was hungry he would go and catch birds or mice in the woods, eat his fill and come back to the loft. All was fine and dandy!

One day the cat went walking and met a fox who marvelled at the cat: "I've never seen such a beast in all my days." She curtseyed to the cat, asking, "Tell me. kind Sir, who are you, what brings you to these parts and what, pray, might be your name?" Ruffling up his fur, the cat said boldly, "I have been sent from Siberian forests to be your new governor; my name is Catafay Ivanovich." "Ah, Catafay Ivanovich," said the fox, "I had not heard of it. Will you come home with me and be my guest?" So the cat went with the fox; when they arrived at the fox's home, the fox treated her guest to all kinds of game, enquiring: "Tell me, Catafay Ivanovich, are you married or single?" "Single," said the cat. "Ah, so am I. Take me for your wife". The cat agreed. And they began to feast in happy celebration.

Next day the fox set off to get some provisions to feed her new husband; and the cat stayed home. As she ran along a wolf chanced to cross her path and began to banter, "Where have you been, my dear? I looked in all the fox-holes and found no sign of you." "Let me pass, fool! And none of your banter. I'm a married woman now." "Who is your husband, Liza?" "Have you not heard, that we have a new governor sent from the forests of Siberia? His name is Catafay Ivanovich. And I am now the governor's wife." "No, I have not heard, Liza. Please may I take a look at him?" "Oh my! That Catafay Ivanovich of mine is so fierce: if anyone displeases him he eats them up right away! Get a lamb and bring it to pay your respects; then lay it down and make yourself scarce, for if he sees you, brother, you'd better say your prayers!" Off ran the wolf to get a lamb.

On went the fox until she met a bear, who at once began to banter with her. "Hold your tongue. Bandy-legs," she snapped, "I'm a married woman now." "Who is your husband, Liza?" "Our new governor, sent from the forests of Siberia. His name is Catafay Ivanovich and he is my husband." "Please may I take a look at him, Liza?" asked the bear. "Oh my! That Catafay Ivanovich of mine is so fierce: if anyone displeases him he eats them up right away! Get an ox and bring it to pay your respects; the wolf is going to bring a lamb. Be sure you lay the ox down and make yourself scarce for if he sees you, brother, you'd better say your prayers!" The bear ambled off to get an ox.

The wolf got a lamb, skinned it and stood there thinking, when whom should he see but the bear dragging an ox along. "Good-day, Brother Bear," said the wolf. "Good-day, Brother Wolf. Have you seen the fox and her husband?" "No, brother, I want to very much." "Then go and call on them." "No, not me. Brother Bear. You go, you're braver than me." "No, Brother Wolf, I won't go either." All of a sudden a hare came dashing by. The bear shouted at him, "Come here, you cross-eyed devil!" The frightened hare came scurrying up. "Well, now, cross-eyed whipper- snapper, do you know where the fox lives?" "I do. Sir." "Then just you run off and tell her that Brother Bear and Brother Wolf are long ready and waiting to see her and her husband, eager to pay their respects with lamb and ox."

The hare flew off to the fox as fast as his legs would carry him. Meanwhile the bear and the wolf wondered where to hide. Said the bear, "I'll climb up a pine-tree." "But what am I to do?" said the wolf. "Where can I hide? I can't get up a tree! Brother Bear, I beg of you, help me find a place to hide." So the bear hid him in the bushes and covered him with dry leaves. Then he climbed up a pine-tree to the very top, and looked around to see if Catafay the Cat and Liza the Fox were coming. Meanwhile the hare ran to the fox's house, knocked on the door and told the fox, "Brother Bear and Brother Wolf sent me to tell you that they are ready and waiting for you and your husband, eager to pay their respects with lamb and ox." "Go back and tell them we are coming, Cross-eyes."

So the cat and the fox set off together. The bear saw them coming and called down to the wolf, "Brother Wolf, the fox and her husband are on their way; he's very small." The cat came up and pounced on the ox, his fur bristling, and he began to tear at the meat with his teeth and claws, miaowing all the while as if in anger:

"Mo-o-ore, mo-o-ore!" "He may be small, but what a glutton!" said the bear. "There's enough for the four of us, but he wants more; what if he turns on us next!" The wolf wanted to take a look at the fearsome governor, but could not see through the leaves. He began to push them aside. The cat heard the leaves rustle, thought it was a mouse and gave a great bound, his claws landing right on the wolf's nose.

The wolf jumped up and fled in terror. The cat himself also took fright and rushed to the tree in which the bear was sitting. "Oh, my goodness," thought the bear, "he's seen me!" There was no time to climb down, so he gave himself up to God's will and jumped, landing with a great thump that shook his insides up. Then he took to his heels, with the fox shouting after him, "He'll give you what for! Just you wait!" After that all the animals feared the cat; the cat and fox had enough meat for the whole winter and they lived and prospered, and still do to this very day. 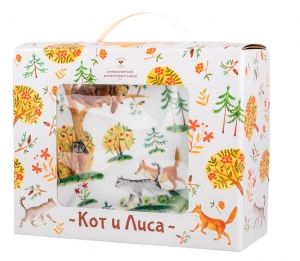