Give your home a cheer with this beautiful naturally looking man’s best friend Lomonosov Porcelain Russian Borzoi. Made from white soft porcelain, this unusual figurine was made at the imperial Russian porcelain factory in St. Petersburg. It will also be a perfect gift for animal lovers. It's also a perfect addition to any porcelain collection.

The Borzoi (literally "fast"), also called the Russian wolfhound (Russian: Ру́сская псовая борзая), is a breed of domestic dog (Canis lupus familiaris). Descended from dogs brought to Russia from central Asian countries, it is similar in shape to a greyhound, and is also a member of the sighthound family.

The system by which Russians over the ages named their sighthounds was a series of descriptive terms, not actual names. "Borzói" is the masculine singular form of an archaic Russian adjective that means "fast". "Borzáya sobáka" ("fast dog") is the basic term used by Russians, though "sobáka" is usually dropped. The name "Psovaya" derived from the word Psovina, which means "wavy, silky coat", just as "Hortaya" (as in Hortaya Borzaya) means shorthaired. In Russia today the breed we know as the borzoi is officially known as "Russkaya Psovaya Borzaya". Other Russian sighthound breeds are "Stepnaya Borzaya" (from the steppe), called "Stepnoi"; and "Krimskaya Borzaya" (from the Crimea), called "Krimskoi".

The most commonly used plural form is the regular formation "borzois", which is the only plural cited in most dictionaries. However, the Borzoi Club of America and the Borzoi Club UK[3] both prefer "borzoi" as the form for both singular and plural forms. 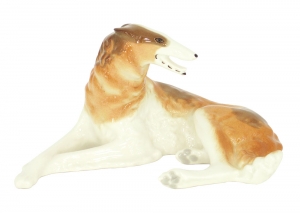